Masterminded by Fred Aspel (6.2) and student-led, the Bedales Film Festival was a great success. 15 films were watched by an appreciative audience and scrutinised by a panel of judges including film producer Koa Padolsky who commented “I was thoroughly impressed with the range of ideas, forms of expression and creativity they have put into their projects. It was very exciting to see a new generation of emerging filmmakers put their ideas to film.” There were prizes for Best Comedy, Art Film, Music, Performance and Drama, with the overall prize going to Toby Goodger (6.2) for his remarkable account of the time he and his two OB brothers spent in the wilds of the Yukon. Tarquin Ramsay’s sensitive account of an old man’s fading musical powers was also in the top 3. 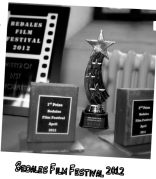