Dunhurstians put on extra performances of Peter Pan in The Olivier Theatre recently after the snow forced cancellations. Children from Blocks 1 and 2 worked tenaciously in rehearsals to get the production ready for the first performance on Thursday just before the snow struck. Although the bad weather initially halted plans, the production returned to a packed audience on Monday for two shows to make up for lost time. Jane Grubb, Head of Dunhurst, said: “The children and staff put a phenomenal amount of effort into making the show spectacular. From the lighting and music to the script and the costumes, the event was captivating. It was lovely to see so many familiar faces around the school transformed into sprites and members of the Kickapu tribe and Darling family.” Read more. View photos. 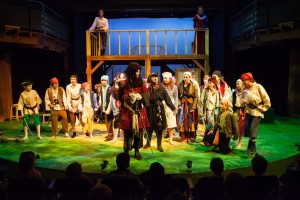