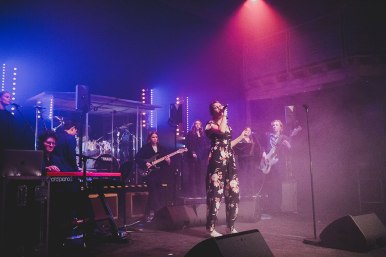 Twelve months ago, after the congratulations had died down following a hugely successful Bedales Rock Show 2018, the most common phrases I heard included “What are you going to do next year, with so many amazing 6.2s leaving?” and “The Rock Show will never be the same again”!

True, 20 of last year’s 30 songs were sung by 6.2s, and after hearing these comments so frequently, I started to feel a little worried myself. However, I was aware that a backbone of very promising talent remained at Bedales, so we set out on the herculean journey towards the Rock Show 2019.

I challenged Block 4 students to play like sixth formers, sixth formers to perform like professionals and we all worked harder than ever before to see if we could come close to matching our 2018 effort. After a relaxing half term break, I still can’t believe how spectacularly our amazing group of students pulled off such a successful show.

Everyone performed brilliantly and it was fantastic to see so many young musicians rising to the challenge. Over the three nights, the Rock Show also raised £6,192 for the John Badley Foundation, which offers financial support through bursaries, giving young people a chance to benefit from the transformational opportunity a Bedales education can provide.

Interestingly, no one this time has asked me “What at are you going to do next year?” As it looks like we’re now set for several years to come! 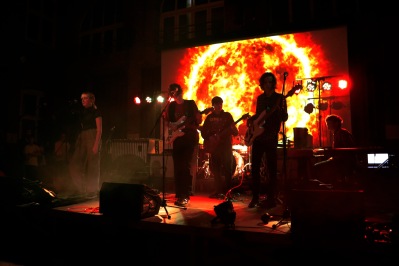 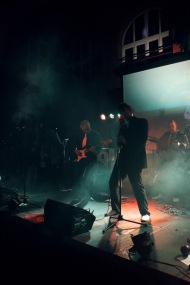 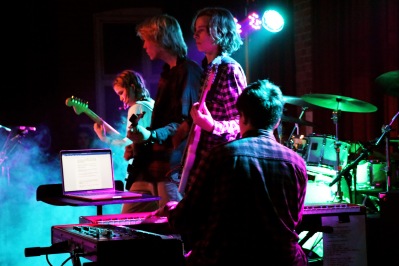 Last Thursday it was Band Night in the Quad. After a week and a half of intense preparation, all the students involved, including myself, performed to a full house.

The highlights were undoubtedly Safi Kazim’s opening and closing numbers, and Natural Woman, performed by Millie Bolton. Raffy Henry not only delivered a haunting performance of Like Gold but he also was there for every rehearsal to ensure everyone sounded perfect in the studio.

There were also some outstanding new performers; Lara Rippinger’s performance of Unstoppable was one of the stand outs of the night and Miranda Woods-Ballard delivered a great performance of Figure It Out by Royal Blood.

Band Night is always one of the highlights in the Bedales Calendar and this year did not disappoint. Musicians including Kai Macrae, Monty Bland, Minna Hall and many more gave up so much of their time and performed with so many different people.

A huge thank you to Rod for all the work he put in to building the stage and running the tech throughout the show and a well done to everyone involved for a great night, but especially to Neil Hornsby whose tireless work and encouragement led to such an amazing show.

Last week saw the 10th birthday performances of the now legendary Bedales Rock Show. The show that has helped launch the careers of several notable OBs including Gabriel Bruce, Marika Hackman, Leah Mason and Freddy Sheed once again threatened to take the roof off the Olivier Theatre. Stunning performances from the spectacular Rosheen Bond and Delilah Montagu were complemented by the wonderful original songs of Josie Blakelock, Jack Merrett and Harley Mitford. A whole host of amazing debut performances from the likes of Stella Green and Sophia Berger were ably supported by the impressive musicianship of Peter Wilson, Louis Giannamore, Luca Caruso and departing Rock Show icons Jasper Ford Welman and Will Reynolds. View photos. Read more.

Music, for performers and listeners alike, is central to daily life at the Bedales Schools. A long and distinguished tradition of fostering ambitions through the development of supportive friendships between staff and pupils has created happy, challenging and co-operative environments in our music departments. Bedales has recently published online a short three minute film focussing on music at Bedales. There is also a longer version, which includes interviews with Bedales Director of Music, Nick Gleed; Director of Music at Dunhurst and Dunannie, Ben Harlan; and guitar teacher, Neil Hornsby. Watch short music video. Watch full music video. Read more on Bedales Music.

The question on everyone’s lips as they entered the Olivier Theatre for last week’s Rock Show was ‘Will things ever be the same without the great Freddy Sheed?’ Well, this question was answered resoundingly by a set of spectacular performances by a new generation of Bedalian superstars. Incredible debuts by George Morony, Luca Caruso, Leo Graziosi and the sensational Peter Wilson, as well as phenomenal performances from our departing 6.2s Zak Hobbs, Talia Pick and Lucy Waterhouse made this once again, a truly special event. Jasper Ford Welman and Will Reynolds (the legendary Rock Show ‘Pit Crew’) kept the show running like clockwork whilst also performing to the highest possible standard. Established stars Rosheen Bond, Bibi Collins, Georgie Deane and Kris Rolt added further chapters to their already illustrious Rock Show careers and above all else, the simply sensational Oscar Cooper proved once and for all ‘We don’t need the Sheed!’

Bedales welcomed back renowned singer songwriter Teddy Thompson OB for a performance in a packed Olivier Theatre recently. Students supported Teddy with solo and group performances of songs they had composed. The evening, organised by Bedales guitar teacher Neil Hornsby, raised £5,000 for the John Badley Foundation, which is providing full bursaries for young people with talent and potential. Earlier in the afternoon, Teddy held a songwriting workshop for students to help and inspire them to develop their music, and described participants as “so poised and confident.” Read more. Read student reviews. View photos. Read exclusive interview with Teddy.

On Monday, many Bedales students saw our peers play in a highly anticipated concert in the theatre. Whilst the majority of us had copious amounts of work to do we set down our books to go and see our friends perform with Teddy Thompson (Old Bedalian). The Olivier Theatre was full of parents, students and local people who had heard about the gig and as Neil Hornsby (music teacher and mentor for the four acts about to play) came on stage, we could tell it was going to be a good night. The line up was incredible with Zak Hobbs (6.2), Josie Blakelock (6.1), Delilah Montagu (Block 4), and Block 5s Rosheen Bond and George Gardner (who unbelievably had been only working together for six weeks!). These acts were jaw-droppingly good, especially considering everything performed had been written by them. The first half went so quickly I was shocked when the lights came up and we were ushered out so the crew could set up for Teddy. Unfortunately, duty called and I had to run off and write a Classics essay and missed Teddy’s performance, however I’ve heard only good words about his set. The gig was in aid of the school’s John Badley Foundation, so hopefully in the future we will have even more inspiring artists come and perform for this great cause.

OB Teddy Thompson filled the Olivier Theatre last Monday night with a terrific performance after a well received song writing workshop. After a half hour opening set from Delilah Montagu, Josie Blakelock, Zak Hobbs and the new George Gardner and Rosheen Bond duo, Teddy began his set. His voice carried the audience through his ballads of sorrow such as Separate Ways to his upbeat That’s Enough Out Of You. In balancing the occasional heavy-heartedness of these songs Teddy lightened the mood with his signature wit. At the end of the set Teddy reintroduced nephew Zak to join him on two tracks. All funds raised went to the John Badley Foundation.

Thursday 4th October marked the long anticipated JFP (Jazz, Folk and Poetry) of 2012. JFP is primarily a student led and organised event, with students not only performing but also helping with the lighting and technical areas. The night included quite a bit of Jazz, a lot of Folk and a smattering of Poetry (especially relevant on National Poetry Day). There was great original poetry from Abby Sedgley and Laurel Mullin, wonderful folk from Zak Hobbs, and spectacular Jazz from Block 3s Luca Caruso and Ally MacDonald. Yet, despite the name, other genres were also very well represented with magnificent covers of Beyonce, The Beatles, Van Morrison, Radiohead and even Jurassic 5 to name a few. Amongst the covers were also original songs written and performed by the very talented Delilah Montagu and Jack Merrett. JFP provided a mix of performances from Rock Show regulars such as Georgie Deane, Jasper Ford Welman and sensational headliner Lucy Waterhouse, and wonderful debuts from the amazing Peter Wilson and George Morony.

Although JFP is very much students having the chance to independently organise their performance, it would be very difficult without the magnificent help and enthusiasm of Neil Hornsby who, by choice, is there to help with every element of JFP if at all needed. Neil described the evening as “another fantastic night of music at Bedales as JFP literally rocked the Quad”, and it was clear that those who attended, both staff and students, agreed.

JFP is always a special night because it reminds the students involved and those watching what they are capable of achieving and helps them to do so independently. Students with all sorts of interests and talents can become involved and the talent is always immense and diverse with this year proving to be no exception. 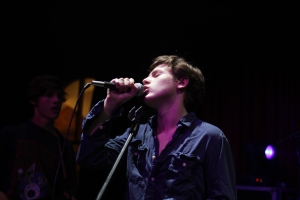