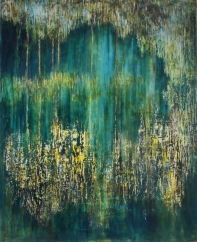 A host of some of the most famous names from the world of art have donated exclusive works to Bedales, for an online auction to be hosted by Paddle8. The two week auction to go live on 11 November, will be a celebration of paintings, drawings, photographs, sculpture and jewellery, many of which have been donated by artist OBs and parents.  All funds raised will go towards the new Art & Design building and a 100% Arts Bursary Scheme for Sixth Form.  Please come to a private view featuring a selection of the works on Friday 7 November, the Orchard Building, 6-8pm.  The exhibition will also be open on Saturday 8 November 12pm-2pm.  Image ‘River Avon / May / 7pm’, Egg Tempera on Gesso Panel, Rupert Muldoon, OB.

…plus more to be announced.