Bedales Selective has opened in the Gallery and runs until 19 September. It offers an ideal opportunity to sample and appreciate the best of Art and Design at Bedales from last year. The Theatre swung into action on Tuesday (10th) with vibrant, fresh new writing in The Babysitter – highly rated by members of our Drama and English departments at this year’s National Student Drama Festival, where it was the stand-out, multi-award winning production from InDepth Theatre. Talented newcomers form an interesting counterpoint to the refined and distinguished pianism of Martino Tirimo (24 September), whose previous performances here have been treasured highlights of our programme for many. Booking is open for all of the term’s events, the brochure having been published and distributed earlier in the summer. However, please note that Talking Design and Filter’s Twelfth Night are fully booked and oversubscribed. For tickets, please call 01730 711511 or email tickets@bedales.org.uk. 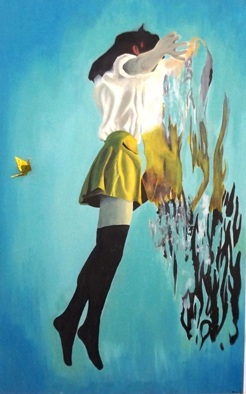 I applied and was given a place on the technical team for the National Student Drama Festival (NSDF) 2013. It was quite a daunting thought that I would be working at a festival I had never been to before and with a crew that I didn’t know. The first of four articulated lorries arrived full of staging, sound and lighting equipment, and we gelled as a group very quickly, tech minds alike! We were responsible for building all the venues, which in some cases was just a matter of rigging lights, or as with three of the venues, actually building a theatre from a sports hall or conference room. Once the venues were built we were then responsible for making sure the show’s set was built, and that the show was up and running, normally within a matter of a few hours. Throughout the week the crew shifted 15 tonnes of technical equipment, eight tonnes of black fabric, two tonnes of scaffolding, 500 metres of truss, one tonne of hardboard, 200 metres of timber, 250 litres of paint, 15kg of gaffa tape, 15 chain hoists, seven sound desks, nine lighting desks, 35 moving lights and one blue Land Rover Defender!